“It is easier to build strong children than to repair broken men.” –Frederick Douglass

I love this quote. Every time I read it, I am reminded of all the broken or incomplete men I’ve encountered during my life, including myself at one time, because of something I call Radicalized Masculinity – the distorted version of true masculinity. The connection between fatherhood and masculinity cannot be ignored but fathers operating from a radicalized masculine mindset often raise children, especially male children, who are oftentimes emotionally disconnected and who struggle with creating and maintaining meaningful relationships. This occurs because many of these men were never given space or permission to access the full range of their true emotional being when they were children. Emotionally disconnected men who do not seek support frequently foster unhealthy environments for themselves and those around them.

Radicalized Masculinity interrupts the emotional progression of male children as they cycle through their respective developmental stages. Author, Terrence Real explains it this way: “Our Sons learn the code early on and well, don’t cry, don’t be vulnerable; don’t show weakness – ultimately, don’t show that you care”. Some may think men who father their male children this way, don’t truly care for them. It would be incorrect and unfair to hold this assumption. I can confidently say from personal experience, even though I was parented under some of these same radicalized masculine codes, my father loved me. He demonstrated his love in the way he was taught men should show love, through his provision, protection, and the sturdy hand of control and discipline. My father’s mother and especially his father did not teach him how to be emotionally open and expressive. When it was my father’s turn to parent my older brother and me, he did the best he could with the fatherhood tools available to him. One particular example of my father’s parenting style comes to mind. 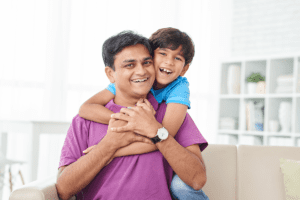 In high school, I ran track & field. I was no Barry Allen (AKA The Flash), but I did my best. One year, my track team was invited to participate in a huge Archdiocese track meet. My race was the 400-meter relay. My father was an actor, and his schedule would not allow him to attend my other track meets during the year, but he was able to attend this particular event. His presence significantly increased my nerves. I wanted to make him proud. There were seven teams competing in the 400-meter relay, and they were all strong runners. Our team did our best, but we did not win the race. Though we placed third I was still very excited and proud of my team.
My excitement was brief. Instead of seizing the moment to say how proud he was of me, my father lectured me on effective running techniques. My heart was deflated. Without my father’s encouragement, I soon lost interest and quit running track.
My father believed his advice was more important to offer than his praise. He believed it would make me a better runner, or perhaps even a better man. I wanted his praise, I wanted to know he was proud of me, but he didn’t. In fact, I do not recall him ever saying those words to me directly. It was not until his recent death when I found a letter, he wrote to his father that I learned his true feelings. In the letter, my father spoke of me and my older brother. He wrote, ” Mark is a good kid and I am proud of him”. Reading those few words brought tears to my eyes. My father was proud of me. It would have been beautiful to hear those words when he was alive.
I do not criticize my father or other fathers who operate using this disconnected parenting style. However, because I now know the limitations of this parenting style, I work each day to expand deeper in my parenting experience. My daughter is thirteen. Over the years she struggled with reading comprehension. I decided early on that my parenting style would be different from my father’s. Instead of lecturing her about ways to improve her reading, I read with her, enrolled her in a reading tutorial program, and each day, without fail, I told her how very proud I was of her and the improvements she had made. This year, she received an A+ in reading comprehension.
My father is not unique in his parenting journey. Over the centuries fathers have taught their male children what they learned from their fathers and so on. Fathers and men, in general, were taught the values and behaviors society wanted them to understand and believe about manhood and masculinity. Masculine men are warriors who take no prisoners and require no help. Frank Pittman, MD expounded on this thought:” Men are told we must go at it alone, we must achieve our heroism as the Lone Ranger, we must see other men as threats to our masculine mastery, as objects of competition”. This approach to manhood has caused many fathers to be trapped, and through their radicalized masculine parenting to trap their male children in what motivational speaker Tony Porter calls The Man Box.
Porter explains, in this box, men are reinforced with the false narrative which tells them men do not show emotions except anger (and as Dan Kindlon, Ph.D. and Michael Thompson, Ph.D. reminds us, the most powerful expression of anger is violence, a behavior we see far too often from some men and boys). The Man Box also teaches fathers and boys, aggression and force are useful tools towards achieving success. The Man Box has not only failed to make whole and complete men, but it has also, over the years, caused many family court officials to mistakenly believe fathers were less capable of being appropriate primary caregivers for their children during the “tender years” – under twelve.
In an interview, with The Father’s Rights Movement, the host Kenneth Rosa and I discussed the fact that fathers were viewed as less emotionally equipped parents than their female counterparts in many family courtrooms nationwide. The painful irony is as a consequence beyond their control, boys who were once taught to be emotionally disconnected, are now, as adults being deemed, in many child custody cases, emotionally unequipped to co-parent their young children. Many fathers’ physical presence in their children’s lives was diminished because of their adherence to a false doctrine of masculinity. This type of forced separation has caused many fathers to experience chronic bouts of psychological distress and their children to grow up without the consistent caregiving experience of two loving parents. The connection between fatherhood and masculinity could not be more obvious.
How can we change this dynamic?

The first thing we must do is acknowledge that fatherhood and masculinity go hand in hand but that Radicalized Masculinity has not worked. It has imprisoned men and boys to a very narrow path of emotional expression, which impedes their ability to have complete relationships with themselves and others. This has resulted in many men having emotionally disconnected parenting experiences because of their efforts to live up to the tenets of this falsified version of masculinity.

The next stage is to advance and promote a new definition of masculinity. We must, in fact, de-radicalize masculinity. This is accomplished by constantly reminding each other, true masculinity does not equate to dominance, aggression, and rugged individualism. True masculinity is propelled by love, and guided by a strong will, compassionate and equitable leadership, acceptance, emotional expressiveness, and the will to accept help when needed. This stage will not be easy. I am reminded of Plato’s The Cave when I think about getting men and fathers to envision a new definition of masculinity.
The Cave depicts a group of people bound together in a cavernous space all facing a wall. Upon the wall are projections of images. To the captives, like fathers and men who believe in Radicalized Masculinity, these images were their only reality. When one of the captives breaks free and leaves the cave then returns with news of an entire world outside the cave, this brave soul is met with ridicule, doubt, and shame. Eventually, more escape the cave discovering what they have been missing, a joyful and fulfilled life.
If we are to father emotionally resilient children, as suggested by Mr. Douglas, we must climb free and challenge our long-held allegiance to Radicalized Masculinity’s cultural dominance. Esteemed author Bell Hooks recommends doing this daily. Because Hook understood the enormity of this challenge, she writes: “Until the culture changes, we must create the subcultures, the sanctuaries where boys can learn to be who they are… without being forced to conform to (distorted) masculine visions. To love our boys rightly we must value their inner lives enough to reconstruct worlds, both private and public, where their right to wholeness can be consistently celebrated and confirmed”.
____
Mark Winkler is an author and motivational speaker. His book, ‘My Daughter’s Keeper’, is the compelling story of a father who risked everything to remain in his daughter’s life.

The Power of Connectivity

I’ve come to more deeply understand healthy human connection, something many considered expendable, is a primary ingredient for peace and joy.

Over the past few years, we’ve heard the term millennials frequently thrown about. Often when we hear it, it’s used by prior generations—Baby Boomers and Generation X— almost as a pejorative. From […]